Quizney™ is about an interactive quiz, method and interactive game of strategy, intelligence and general culture, designed to be played as entertainment game on the Internet, TV game show, computer game or, independently, as parlor game for two or more players where players wager (play or real money) on the next quiz details – question type, question topic, field/sub-field, difficulty level (in percentage of the players who answered correctly), tips regarding the next question, etc. Quizney™ is a game that involves a collective "pot" consisting of the players' wagers which is awarded to the player who wins the round or makes a wager which goes unmatched by other opponents.

The game is based on a collection of questions, each question including detail elements such as question type, question topic /area, difficulty, info (tips/clues), and others. The game is played by two or more players, generally not exceeding nine players that interact with each other, by making bets, thinking they know how to answer the question or have a strategy of bluff, after finding out the details of the question that follows. Players can access items to evaluate the competitors, such as efficiency, level of knowledge, power level, things to be taken into account when betting. Consequently, the game calls not only players’ knowledge but also the strategy they use and their intelligence.

Furthermore, bonuses (help tools) are available for players such as life, only 2 (only two answers possible), ask the players (the answers will display the players' response preferences). 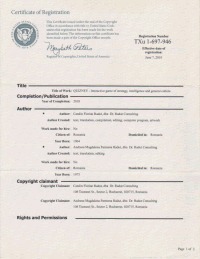 Your commitment made this happen. Thank you!
Intellectual property
Poll
Contact